Elgon
Website updated March-21. Info about added and updated articles see Footer. You may have to click on "Home" to see all new articles.
Clean web history in your browser, or update each page, click on almost round arrow near the top of the browser pages - to be sure to get the right version of the page. 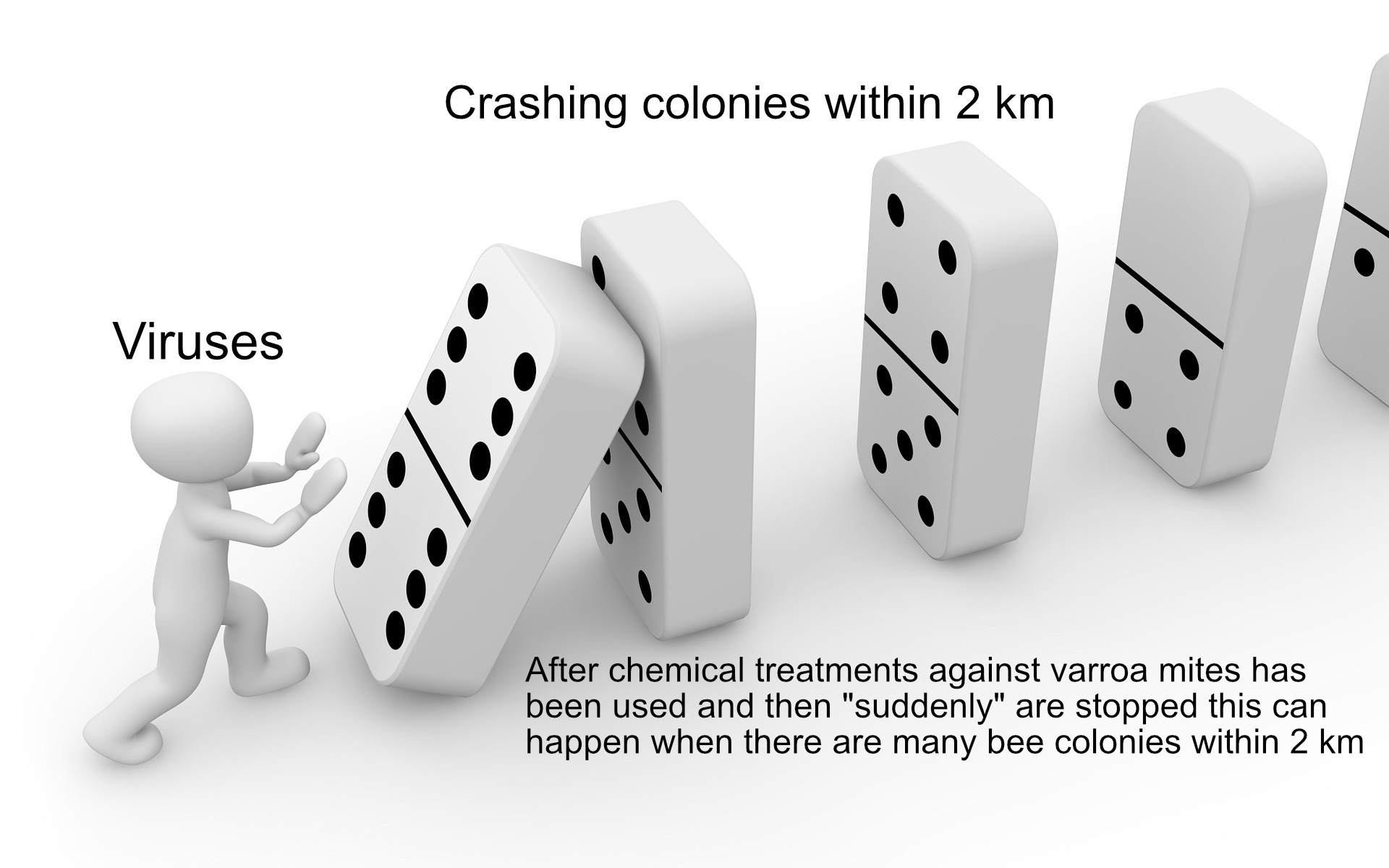 Chemicals are bad guys in context of treatments.

Chemicals, organic and synthetic, are used to kill mites.

They don't only kill mites but affect the microbes in and on our bees. These microbes are called the microbiome. This play an important role in the immune system. Before chemical treatment the different bacteria, virus, fungi, etc were most often in a balance with each other. Varroa mites when possible are favouring viruses, especially the Deformed Wing Virus (DWV), to develop into pathogenic quantities.

In areas where the density of bee colonies are high it's difficult to just stop treating against mites without loosing many colonies, your own and your neighbours. Viruses take them down. Resistance against growth of mites must become strong in your stock before losses will be substantially smaller. Hunting mites is a part of that, in brood and on bees. Resistance against viruses plays also a role to become treatment free.
Reinvasion is no good
In an apiary at least 2 km (1.5 miles) from other bees you can try different solutions getting treatment free without harming other bees outside these 2-3 km.

You avoid loosing bee colonies like dominoes tiles falling through ongoing reinvasions, one after the other of colonies being reinvaded – by having few number of colonies in an apiary.
Few colonies in an apiary is good
I have tried bees with this regimen. I have only one colony in an apiary. That colony is not even of the best resistant variety I have. It developed problems with non resistant bees of others in an apiary half a km away. Other colonies in my apiary close to the foreign bees did though fine. And the foreign apiary succumbed finally. I moved the affected and treated colony into deep forest with 2 km to other bees (my own). This colony hasn't needed treatment since. It was moved four years ago.

I moved other less good colonies to similar apiaries and put three in one and four in the second. About half in each didn't need any treatment the season after they were moved there. The mite and virus situation became enough good so the best half didn't need any treatment. Just some odd wing damaged bees (DWV=deformed wing virus) were seen. Though all of the moved colonies had needed full treatment of thymol pads in their former apiaries the previous year.

The amount of treatment (thymol pads) was just ¼ of a full dose in the inferior half of the colonies. Such small amount of thymol harms the microbiome much less than a full dose. All of the moved colonies wintered well.
The very best is to have only one colony in an apiary to begin with. Two may also work fine. Three and four may work well when resistance has increased in your stock. Next step is five or six colonies and so on. I would not exceed 5-6 until resistance seems strong in the stock. 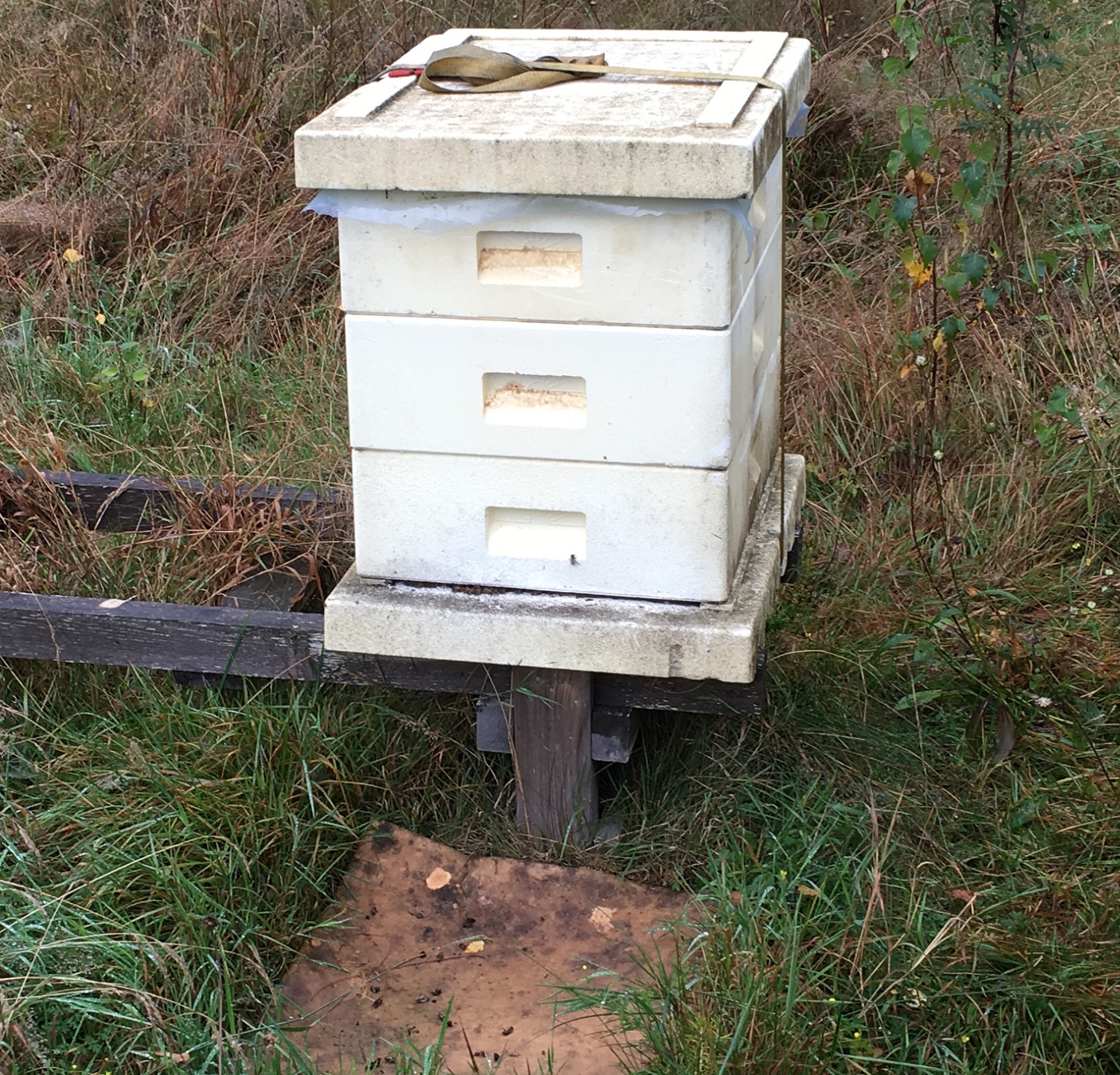 Having few colonies in an apiary wil decrease the reinvasion threat to other colonies in the same apiary or in apiaries closer than 2 km (1.5 miles). It will colonies develop resistance as they will survive easier without getting a lot of extra mites from other colonies to deal with. 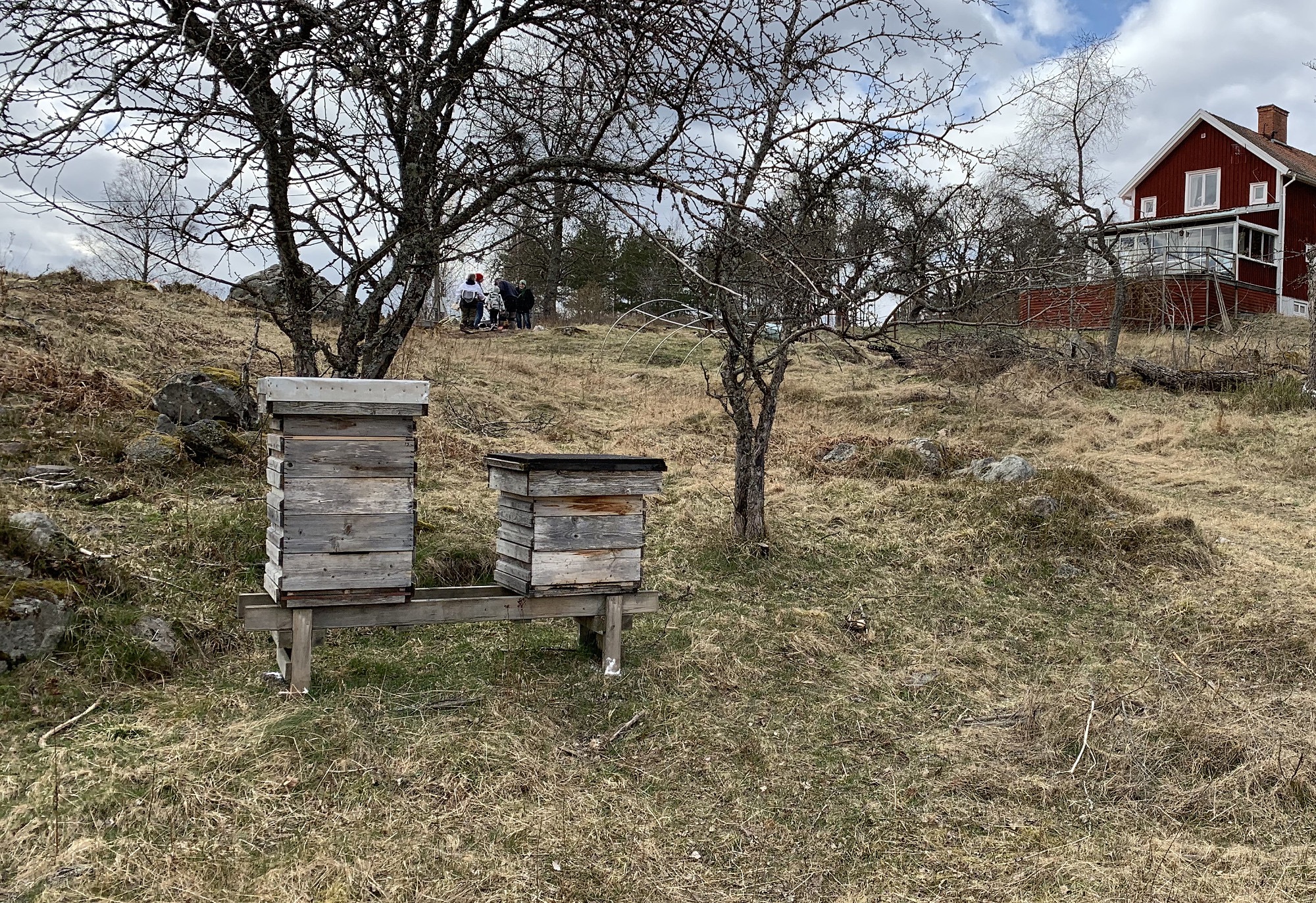 Almost isolation
If you are lucky and have an apiary at least 2 km from other bees, your own or others, you can put one or two of your best colonies there to see if they can hunt mites and avoid reinvasion enough to become treatment free right away.

With a low mite population viruses will not grow much. If you are lucky the bees can stand the virus infection they develop with these few colonies in the apiary. Especially if your bees are not beginners on their path to a treatment free life.
Small entrances
Another way of helping bees against reinvasion problems is to keep entrances small, not bigger than 7 x 140 mm. Such entrances are easier to defend against intruders. It's not heavy robbing that is most often about to happen, but slow, so called silent robbing, which you hardly recognize.

Drifting is occuring more frequently when a mite population rises in a colony. Bees that fly out with a mite rider irritate the host so that it tries more than otherwise to enter the closest colony on their way back.

To hinder drifting, besides using small entrances, it's good to place colonies at a BIGGER DISTANCE from each other. 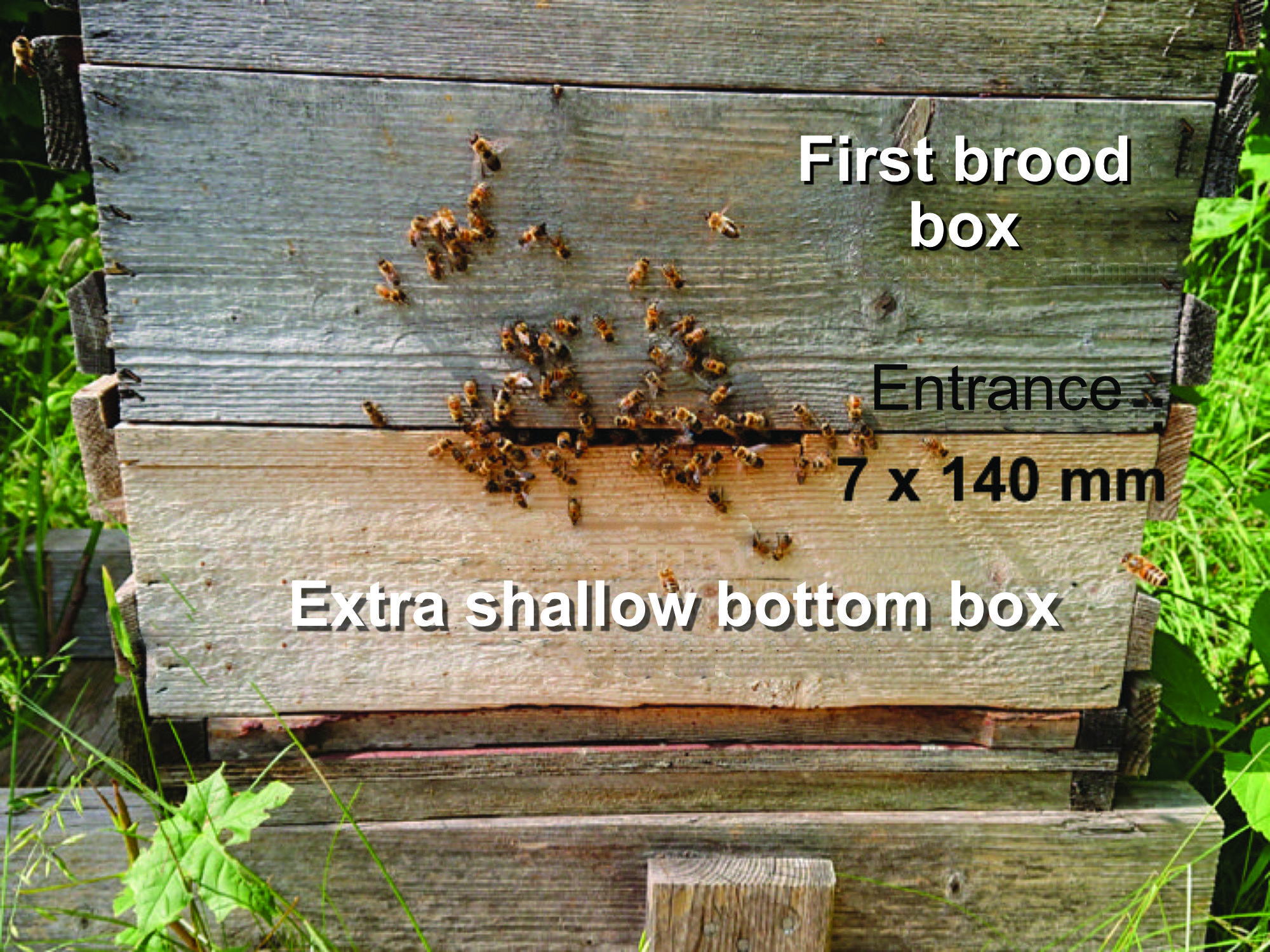 A high bottom helps
To be able to use such a small entrance as 7 x 140 mm it helps a lot to mimic the appearance of the bottom to how it's designed by a feral colony in for example a hollow tree. There you can often find an empty space below the combs. Also the entrance hole is often somewhat further up from the lowest part of the combs built by the bees.

To resemble this design you can make a shallow box even more shallow (about 10 cm, 4 inches, high) to be placed between ordinary boxes and a closed bottom. In upper front part of an "extra shallow" box you cut a notch, 7 mm deep and 140 mm wide. This will be the entrance when the first ordinary box is placed onto a bottom with such an extra shallow. This extra shallow will hold top lists with a 2-3 mm wide slot on its under side. In this slot you glue pop sickle sticks and wax them.

The bees can build small combs when they have nothing else to do. It seldom happens if you super the colony in time with its development. To help ventilation I use two 5 cm (2 inch) netted holes at the back corners in the tight bottom below the extra low shallow. Such a construction as this will put an end to clogging of the entrance of dead wet bees in wintertime. And gives the bees extra sheltered space if needed in summer. 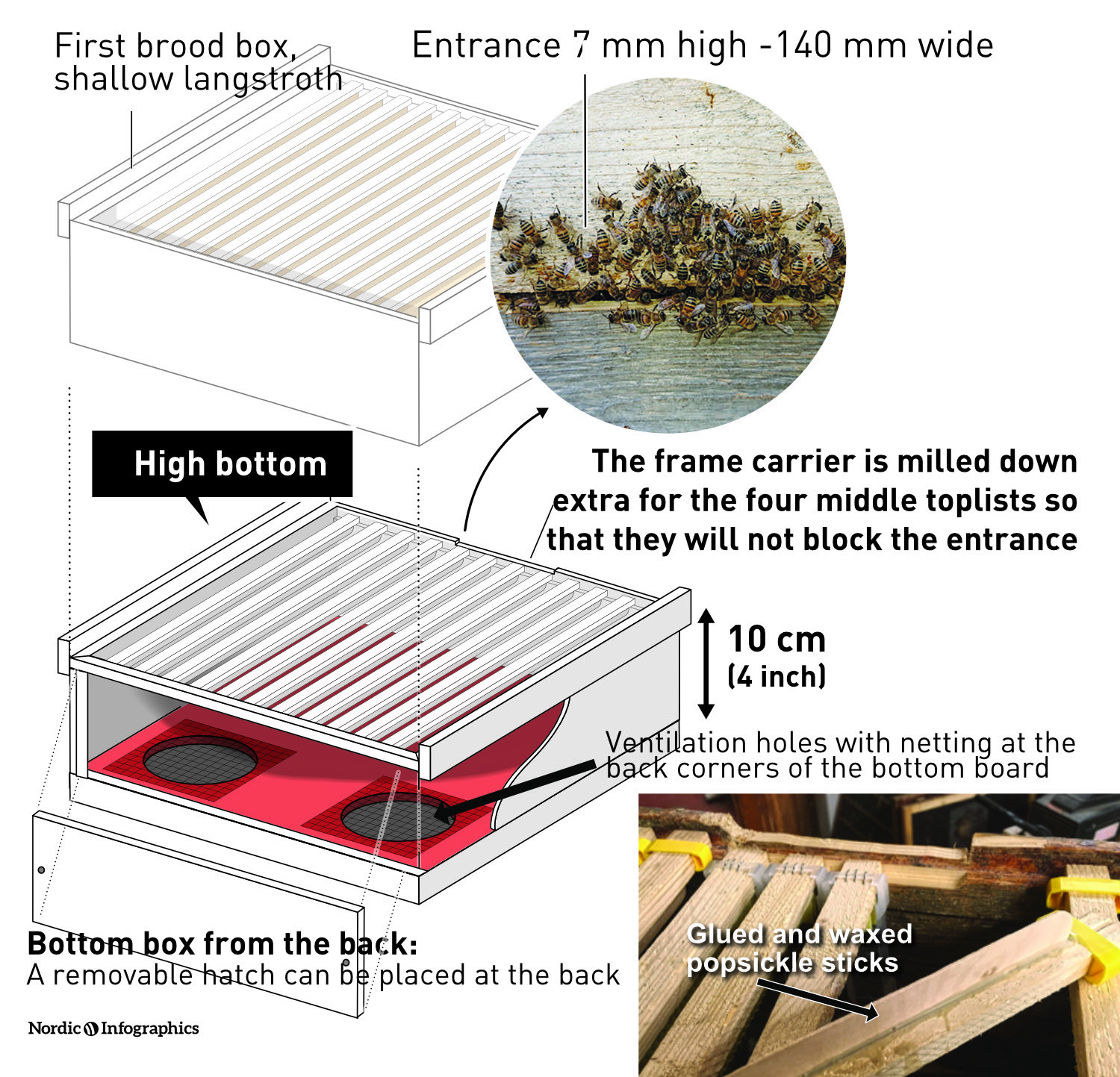 Natural cellsize for the brood
When bees are adapted into drawing their own comb without the help of wax foundation they make different cell sizes for different purposes, smaller where they make brood and bigger where they store honey. In the brood area cell size varies as they do in the honey area. The average brood cell size is often 4.9 mm over the parallel sides, measured over at 10 cells. A good habit is to have at least a good part of the brood combs with 4.9 mm cells.

The existence of natural selection of the fittest point to a better fit bee, a bee with better survival characteristics if you let what occur naturally guide you. Anyway there's no way you will produce a bee less fit giving them a cell size that better corresponds to their own choice.
https://www.elgon.es/diary/?p=1155 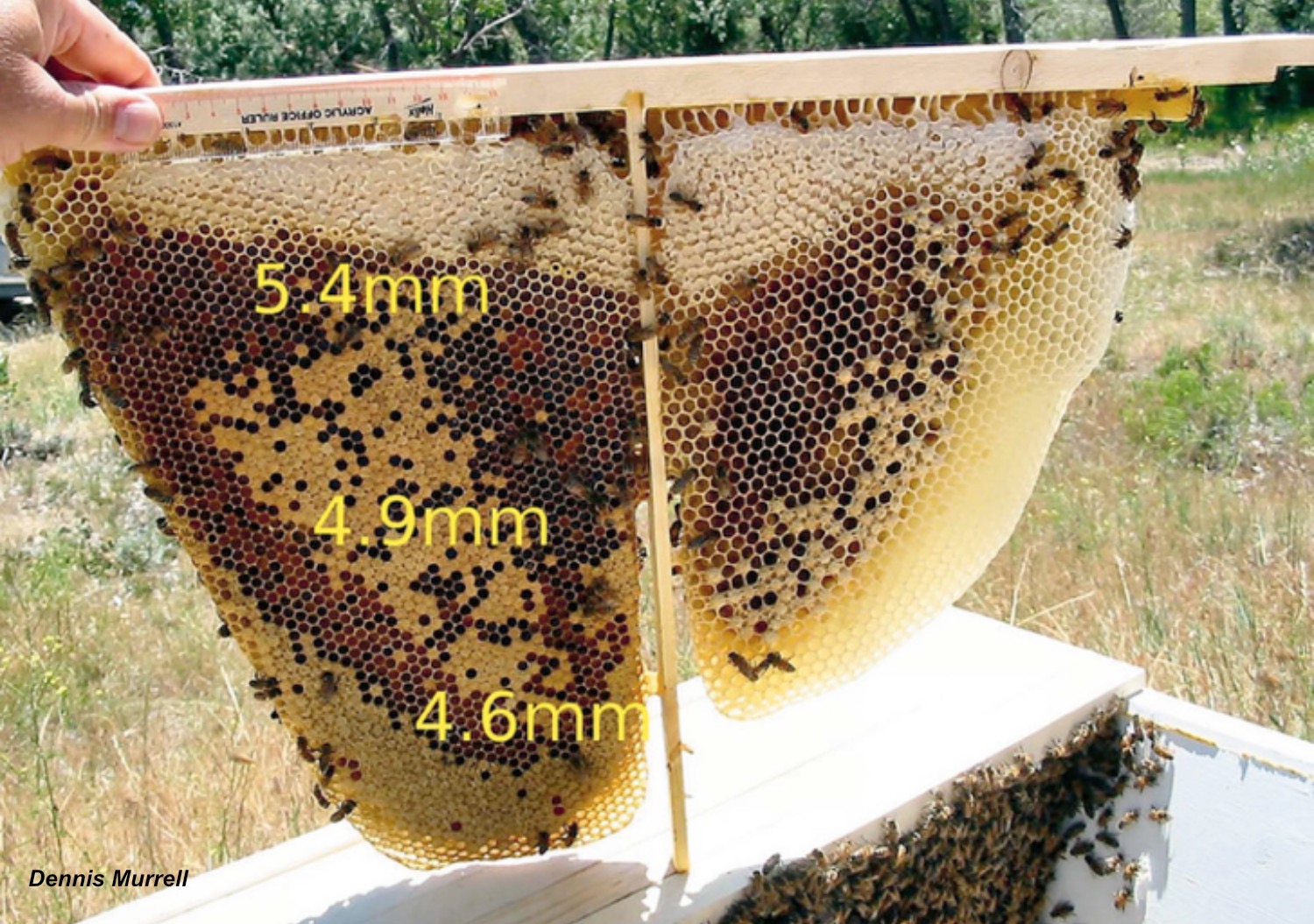 If you you have at least 4 combs of 4.9 mm cellsize in the middle of the broodnest you help your bees to better fitness, to survive and thrive.
Resistance traits
What are the traits that make bees resistance? They are more than one and more than just a few. We don't know how many they are.
When we say resistance we mean that the bees can on their own live a healthy life and thrive. Whenever we check the mite level in resistant colonies we will find a low level. If the level sometimes is higher, that is only temporarily and doesn't affect the bees much.

A HEALTHY MICROBIOME is important to keep the different populations of microbes under control, for example viruses.
There are other resistance traits against viruses, like FORCING OUT VISRUS-SICK BEES out of the colony and producing appropriate PEPTIDES (short proteins) that combine with viruses and annihilate them.
PROPOLIS is know to contribute to keep pathogenic microbes under control.
Good NOURISHMENT, like good pollen, as well.
The composition of LARVAL FOOD can affect the reproduction ability of the varroa mite. The bees can identify capped brood cell that contain mites, and UNCAP those BROOD CELLS. Some bees clean such cells, others recap them. Some bees can distinguish between capped brood cells that contain mites with offspring and those without offspring and only open those cells where mites have offspring.
Some bees GROOM themselves and other bees well from mites, and bite them.
Some bees DEFEND their ENTRANCE better from intruder bees (robber bees and drifting bees) than other. Thus avoid getting extra mites from those. Some bees are more INCLINED TO ROB other bees. Some DRIFT easier into wrong colonies. Thus they can spread mites.

All traits and different conditions, like number of colonies in an apiary, distance between the colonies and distance to other apiaries, will contribute to the resulting varroa level.

1. We set the varroa level as the first guideline for selection of inferior and superior bee colonies. We will thus get a summing-up of the breeding value that includes most types of traits, known and unknown.
We fine tune this summing up
2. with observations on a hard board in front of the entrance of eventual wing crippled bees,
3. development of the colony and
4.appearance of brood frames with capped brood.
These guidelines for developing varroa resistant bees works very well. For more on these guidelines see next article.
Resistance is growing
When the number of colonies that need treatment is definitely lower than 50% in an apiary you can consider increasing the number of colonies somewhat. It's good if you can increase the area with new apiaries now that are closer than 2 km from your best apiary. Or someone of the beekeepers you cooperate with may already have or will establish an apiary not so far away.

What you are doing now is building an area where good resistant bees are dominating. The number of them are more than 50%. The aim is to also develop the best part of this area to have only resistant bees.

What number of bee colonies can you have in a good resistant apiary? Try out by increasing the number one or two per year. Maybe you stop at 6 or 8 for some years.

I have a greater number than ideal in my home apiary, 18 colonies. 4 of these were treated 2020 (20%). But no one got full treatment (2 x 10 gram).
[Full treatment for colonies when you start with bees that havn't traveled long on the road to resistance is 2 x 10 gram + 2 x 10 gram (40 gram) or 2 x 5 gram + 2 x 10 gram (30 gram)]
2 of the four treated got half treatment 1 x 10 gram or 2 x 5 gram (10 gram)
2 got ¼ treatment 1 x 5 gram. One of the treated colonies got its treatment only in spring and then a new queen. The other three will get their queens replaced the coming season.
One colony died in late winter. Thus 5% winterloss in this apiary.
This apiary is doing a good job influencing the area with good drones. 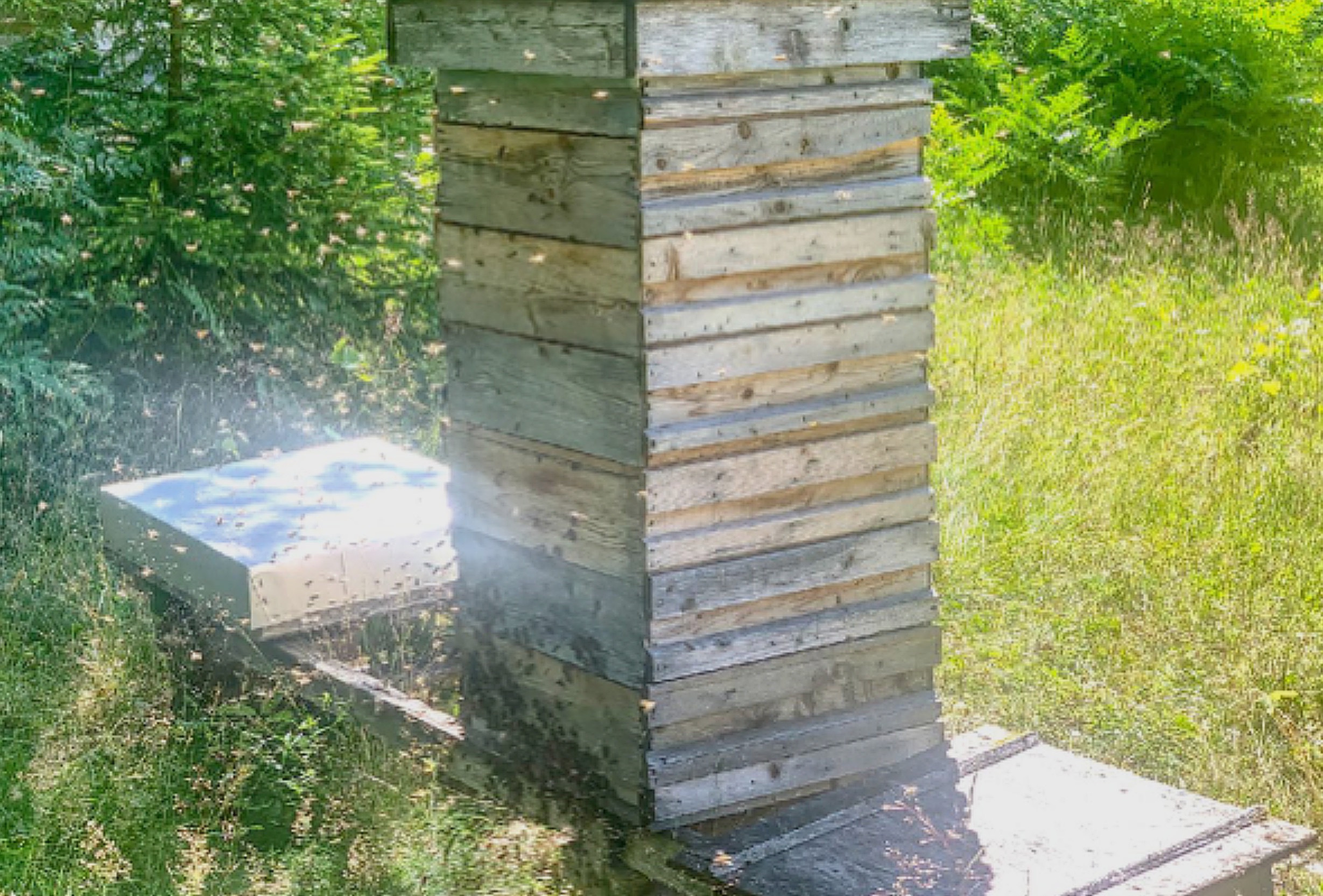 This is breeder 104, used 2019. The photo was taken 2020. This colony was last treated for varroa in 2015. A daughter born 2019 will be used as a breeder in 2021. Almost all of the daughters of 104 gave a split in 2020. They were allowed to raise their own queen. These colonies will contribute with good drones.
To the top of the page
Saitmap
Home
Updates in red, March -21
BEEKEEPING
With Elgon bees
Making of a beekeeper
One year with the bees
VARROA
Varroa war
My first 12 years
Ohlsson in Finland
Why resistance
CELLSIZE
Cellsize history
Norwegian test
Test design
GRADUAL RESISTANCE
Thymol pads
Monitoring Varroa
Resistance help
Guidelines
© Erik Österlund
2016 - March 2021